Understanding The Main Components of The Internet 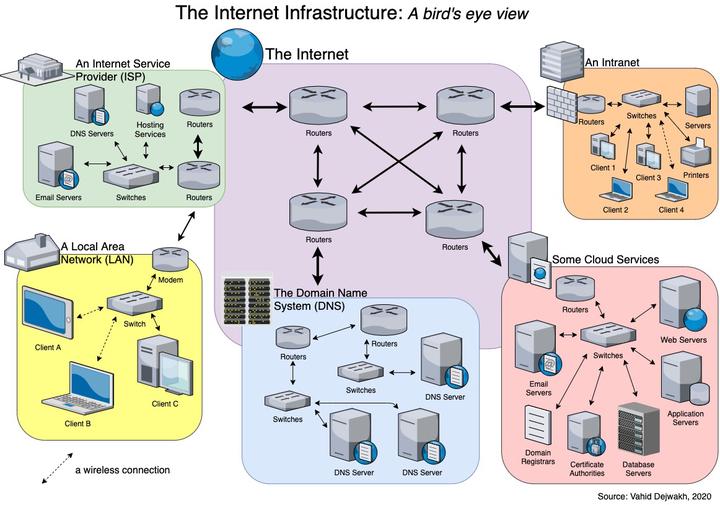 ISPs, routers, gateways, LANs, HTTP, the cloud, the web… the Internet is so complex that we could spend days, months, and even years studying this stuff, and we still wouldn’t be done.

But just several minutes is all we need to at least get the basics down.

Let’s first understand the main components of the Internet–the infrastructure that supports the entire web. Here we’ll review what routers, modems, gateways and switches are, the difference between a web server and an an application server, and some esoteric things like the Domain Name System (DNS) and domain registrars.

Building this mental model of the Internet’s infrastructure will then allow us to get deeper into the layers of the OSI and the TCP/IP models, which we’ll cover in Part II. These layers will help us understand every step that occurs from the time we enter a URL in our browser to the time we get a fully functioning webpage displayed.

Finally, in Part III, we’ll go even deeper into each layer’s contents, and thereby explore how security works.

In the process, we’ll develop a better appreciation for the complexity and brilliance of this thing we’ve all come to love–and maybe also sometimes hate?

I. The Internet Infrastructure: A bird’s eye view

At the most basic level, we are all familiar with our home’s Local Area Network, or LAN. That’s how most of us working from home (or surfing the web from home) connect to the Internet.

Our home’s LAN allows multiple devices, or clients, to connect either via an Ethernet cable or wirelessly to a switch (what most of us colloquially call a “router”), which is itself connected to a modem.

Sometimes we may have a gateway instead of those two separate units, which is a single unit that combines the responsibilities and capabilities of both a modem and a switch.

Our LAN connects to an ISP’s infrastructure via our modem (or Gateway). We usually pay our ISP a monthly fee for this service, which ultimately allows us to connect to the wider Internet.

In the United States, some of the biggest ISPs include AT&T, Cox, Comcast, and Verizon.

Most plans provide broadband-level connectivity, whether through a coaxial cable or fiberoptic connection. Some ISPs still offer the slower DSL connections, but at least the dial-up days are no more.

Through a series of routers, our ISP’s infrastructure directs traffic between the many households it serves and the wider Internet. Traveling through all these hops across many routers means there’s always going to be some latency in our connection, regardless of our connection’s bandwidth.

ISPs may provide their customers with email addresses. Someone with a @cox.com or @aol.com email address, for example, has probably gotten it from their ISP (Yes, AOL used to be an ISP back in the day). Email services would be handled by the ISP’s email servers, through an SMTP protocol.

ISPs may also provide some basic hosting services to handle their customers' personal websites, which would run on the ISP’s web servers. More on web servers in the Cloud Services section below.

Lastly, ISPs also provide DNS servers. We’ll address what these do in the DNS section (next), but suffice it to say that they offer cached copies of what the main DNS provides, in order to expedite the process of retrieving data from the Internet.

Whenever you use your browser to go to a specific website (e.g. https://vahid.blog), your browser application needs to first figure out which server would have the correct website information.

After all, a domain name (e.g. vahid.blog) doesn’t tell us anything about the IP address of the server containing the website we’re looking for.

That’s where the Domain Name System (DNS) comes into play.

Every time you go to a website you’ve never been to before, your browser has to first triangulate the IP address associated with that domain.

It first hits up the DNS Servers supported by your ISP. If those servers don’t have a record of that domain either, they then forward the request further up the chain until it gets to the DNS, when the request travels down the DNS hierarchy from the root name servers down, until it finds the IP address of that domain name.

Your browser will then cache (i.e. save) that domain-to-IP address key-value pair so that it won’t have to look it up again the next time you enter that domain.

Why do we need this process? It’s simply for convenience, because it’s much easier to remember, for example, “google.com” than it is to remember an IP address.

Depending on where you live, and because Google is such a ginormous application requiring thousands of servers spread out across the globe, you may be sent to another server closer to you, with another IP address.

Wow, that was a long–but important–detour.

The next step in our journey is understanding the various types of cloud services that companies on the Internet provide–services that are crucial to our ability to do everything from sending emails to shopping securely.

A general concept to keep in mind as we discuss some of the various types of services that fall under this category is that these services are not necessarily independent silos, nor are they necessarily bundled together.

A secondary concept is that companies typically have hundreds, thousands, and maybe even millions of servers, sometimes distributed all over the globe–and they keep adding more as demand for their services grows. For example, Google had an estimated 900K servers in 2011. Gartner estimated that by July 2016, this number had grown to 2.5 million.

The Internet connects ISPs, the DNS, and Cloud Services together, and allows them to communicate. This is of course a simplification, and network engineers spend years and decades getting deeper into the weeds.

But for our purposes, it’s useful to think of the Internet as just a network of routers spanning across the entire world, connecting networks together.

Each router redirects data across a hop to another router, getting the data progressively closer to its final destination IP address.

Along the way, a signal will encounter four different types of latency, causing a delay to its arrival time:

Our last topic is on Intranets, which are also called private networks.

Although not technically part of the Internet, and separated from the Internet by a firewall for added security, an intranet is nevertheless an important concept to understand and place within this overall structure.

Most organizations have their own individual servers, routers, and switches that connect all computers and devices in the organization together, which allows all employees to access shared drives, printers, and common applications like HRIS and financial systems.

An intranet also allows a user to log in to any computer on the network, and access their personal network drive.

Depending on the size of the organization (and how many computers and servers need to be connected), an intranet could be anywhere between just a slightly more extensive LAN, or a mini-internet that spans across many countries.

That’s it for Part I!

In Part II of this three-part series, we’ll dive deeper into the seven layers of the OSI Model and the five layers of the TCP/IP model.

In the process, we’ll also explore what happens at each layer from the moment we enter a URL in our browser to the time we get a page loaded.